Another beautiful morning so I headed out at Sunrise. The aim of this morning was to photograph 2 birds that are high on the tick list. The Lesser Spotted Woodpecker and Golden Oriole.

The Golden Orioles are in abundance this year with their flute-like song echoing around the hills but are very difficult to photograph as although bright yellow (the male), they hide very well. Lesser Spotted Woodpecker seem to also be very common amongst the Oak Trees.

Something was strange this morning, apart from the multiple constant song of the Nightingales, everything else was very quiet. It’s almost like the birds have gone on a day trip elsewhere. The Bee Eaters were not active, no Hoopoe calling and certainly no Golden Orioles, which are all usual noises just after sunrise.

I walked around the hills and everything remained very quiet. I was just about to give up when I heard a faint tapping from one of the large Cork Oak. I assumed it was a Lesser Spotted Woodpecker. Unfortunately, the sun was behind the tree so making it difficult to see. I then noticed some red feathers sticking out of a hole. It was not a Lesser, but a Greater Spotted Woodpecker making some home improvements, the sound muffled by the fact he was inside the tree.

Almost perfect timing, he decided to reverse out of the hole, he was a Male Greater Spotted Woodpecker. I took a couple of shots, but wasn’t expecting much as it was directly into the sun with the bird in the dark shade. I added 2/3rd of a stop of exposure and hoped for the best.

Back at the computer, I was actually surprised how much I was able to clean the shot up. Considering it was high ISO and I had a 1.4x Teleconverter fitted am I happy enough with the result. It certainly was good to come back with at least one photo. 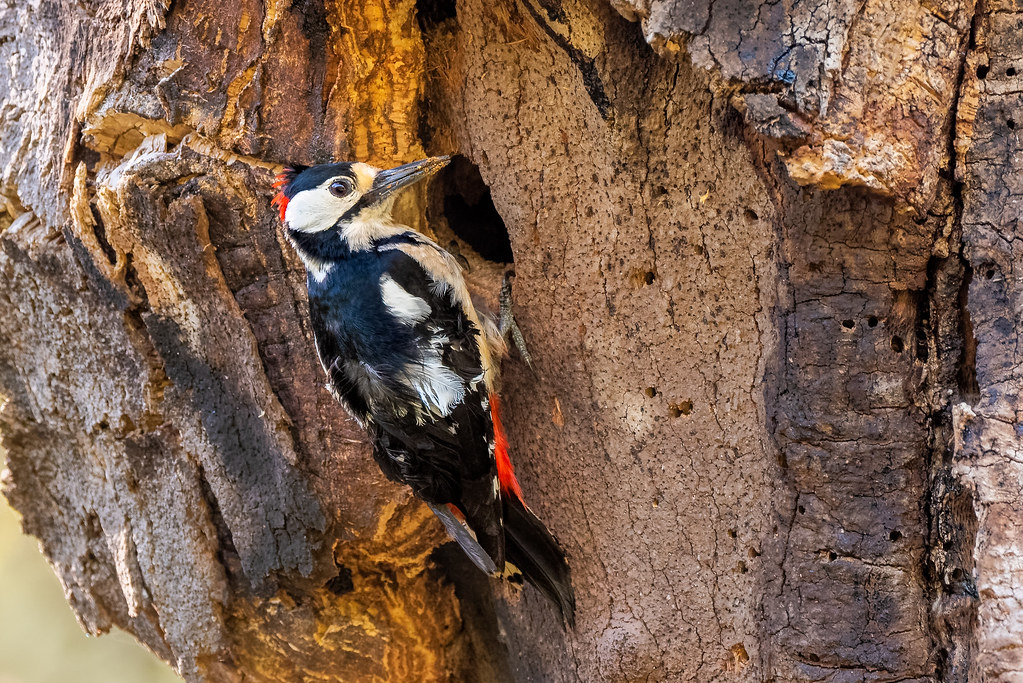