Smartphone photography is a little restrictive which actually makes it fun. Trying to get a shot that shouldn’t work is a real challenge. This morning I was down at the river and the sun was beaming down onto the bridge/ford and the rising steam made it look amazing. The sun is a little blown out, but again, that’s the restriction on a smartphone as its dynamic range (the difference between the darks and lights) it can capture is quite small.

As the saying goes, the best camera is the one you have with you, so I wasn’t going to miss an opportunity to capture this. Once the world returns to some sort of normal, keep an eye out for my Smartphone Workshops!

Being a Nature Photographer, my life is made much easier when nature finds me rather than me going out in search of it. However, in the early hours of this morning nature found me in a drastic way.

I love a good thunderstorm and here in the dark hills of the Algarve it can put on a great show. Last night it got a bit too close.

Around 3am I was awoken by an approaching storm, the rain was battering the roof and faint flashes of lightening followed by thunder was approaching. Within 10 minutes, it was overhead and I was lying in bed watching the flashes. Suddenly, there was a bright but small flash with a loud bang followed by a huge bright flash and an incredible crackling boom. This sound coincided with the sound of things breaking and being thrown through the air and even smashing glass.

I won’t type what I actually shouted as I jumped out of bed but I thought a window had broken so my first thoughts were our cats.

The power had tripped so with just our torches on our mobile phones we opened the bedroom door to find pieces of plastic on the floor. I picked it up and realised it was an exploded ADSL filter, quite a long way from the telephone socket. The power was fine, it had tripped on the board so with light returned I could investigate the damage. There was no broken window it was an outside lamp that had been broken by a flying plastic door! The lightening strike had gotten into the telephone line and exploded the cables, connectors and ADSL filter. It had blown the socket off the wall, the modem in the router had exploded and the strike travelled into my LAN (wired network in the house) taking out a few components along the way. The home phone also exploded.

END_OF_DOCUMENT_TOKEN_TO_BE_REPLACED

The weather promised that the rain would ease and the clouds would break. I woke at 5am to rain but put my trust in the weather forecast that insisted it was going to clear. I got in the car and I could see stars in the sky! Yes, it started to clear.

However, the 40 minute drive to Ferragudo and the clouds rolled in again. I waited hoping for some pre-sunrise shots, but the clouds made it far too dark. Then there was another break in the clouds just as the sun was rising. I setup on the beach and started to take some long exposures but the clouds just kept building and I couldn’t help notice a large rain shower approaching. Just as the sun was rising above the roof tops of Ferragudo, I shot the photo below. This is not what I was hoping for, but I was determined to come away with something, but I don’t really like it! 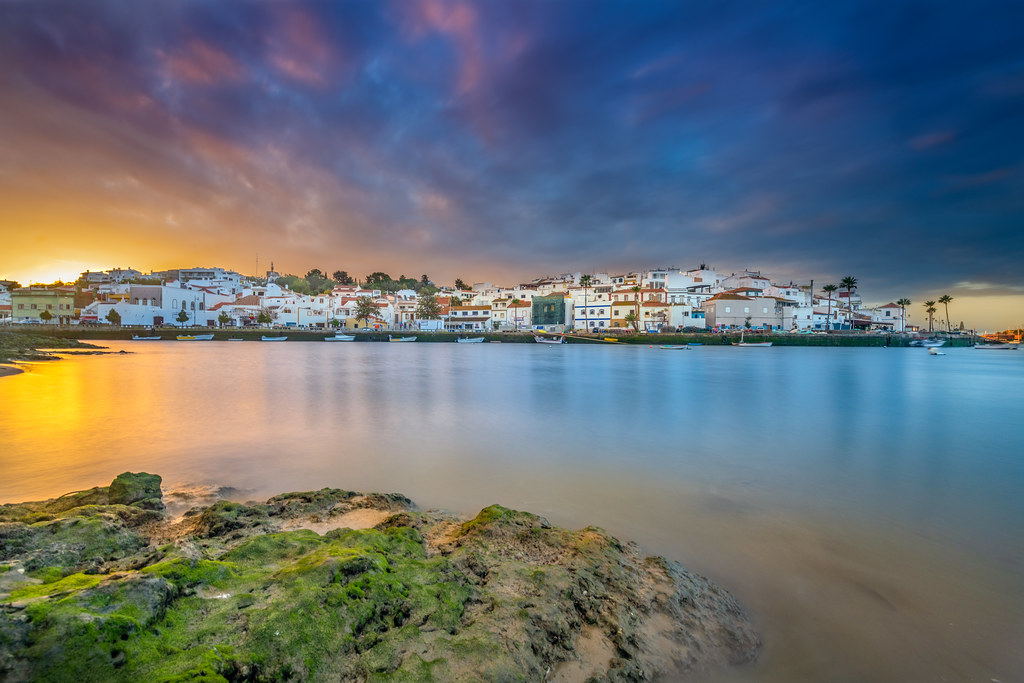 END_OF_DOCUMENT_TOKEN_TO_BE_REPLACED

A heavy shower hit this morning just as I was getting back in the car from a sunrise shoot at Ferragudo. As I was about to reverse the car I noticed this rainbow in the mirror.

I grabbed the camera and took this very quick shot as it was actually pouring with rain at the time. I didn’t notice the 2nd rainbow, but the camera picked it up. 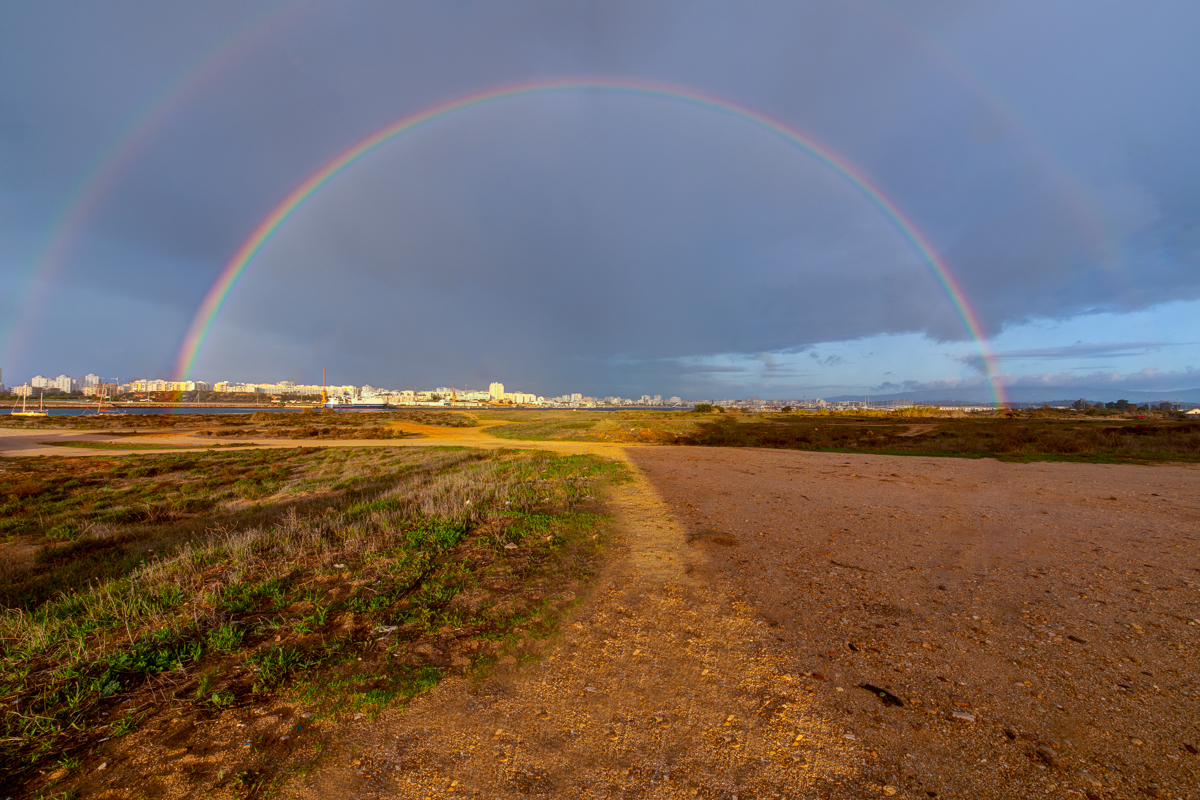 END_OF_DOCUMENT_TOKEN_TO_BE_REPLACED

If you live in Portugal, you may have noticed we had some unexpected storms this afternoon. One particular storm passed to the north of the Quinta and as we are on top of a hill, our view north-east as the angry clouds passed us by was amazing.

I set the camera up to constantly take photos and I captured 8 separate strikes. It wasn’t one of our usual heavy, loud, wet and windy storms, but amazing to watch it pass us by.

Here are all 8 strikes merged into one photo. 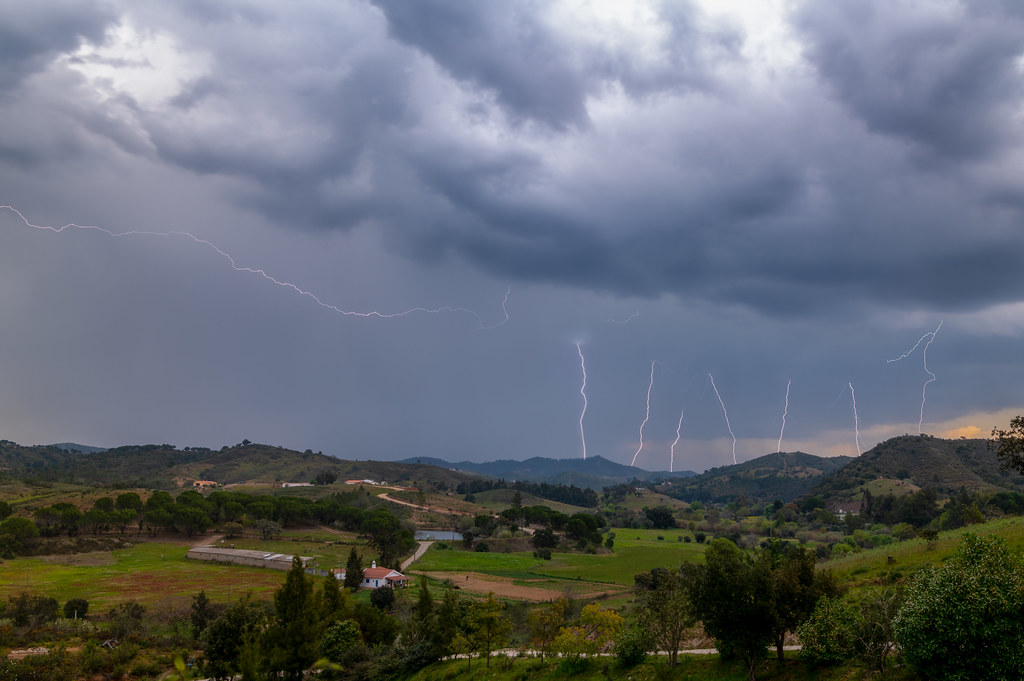