I have written this reference because there seems to be a lot of confusion surrounding the species of snakes that are found in Portugal. Snakes are not really to be feared within Portugal with only two Vipers that pose a small threat to humans (and of course pets). One of these Vipers, the Seoane’s Viper (also known as the Baskin or Portuguese Viper) is confined to the extreme north of Portugal. The venom from these two vipers are not considered dangerous to humans in the same way the northern European Adders pose little threat. Of course, there can be cases of people having an allergic reaction to the venom in a similar fashion to those with a Bee sting allergy. Whilst there are some other venomous snakes, these snakes are not equipped to inject venom in defence, they use their rear-positioned fangs to subdue prey and therefore are very unlikely to be able to inject a human or pet.

You may hear the local Portuguese calling snakes a “Cobra” which can cause alarm, but fear not, there are no Cobras in Portugal; Cobra is the Portuguese word for Snake.

Please remember that all snakes will be far more scared of you than you are of them! If you are unlucky to be bitten by any snake, venomous or not, it is a good idea to seek medical advice (and vet advice for any pet). Whilst they may not pose a threat from venom, bacteria from a bite could cause an infection.

Currently, I have very little photographs of Portuguese snakes and therefore have added some Creative Commons licence photographs of snakes I am yet to photograph (see attributions at the bottom of the page). Links for further reference and photographs have been provided to the amazing iNaturalist website. Please note that the descriptions below are just a guide, occasionally Snakes can be found with different morph colouring and juveniles can often be difficult to identify.

I hope this quick guide will help you understand the fantastic snake-life we have in Portugal and enable you to enjoy viewing them. Clicking the photos will enlarge them and clicking the “More information and photos” link will give you access to many more photos to assist you with identification.

Named after French Naturalist Fernand Lataste, this Viper is easily identified by a horn on the tip of it’s nose giving it’s other name of Snub-nosed Viper. This venomous viper has the usual triangle-shaped viper head and has a diamond pattern along its back. It has a yellow tip to the tail which is believed to be used to attract prey. It can grow to just over 70cm but more commonly seen much smaller. There are 2 sub-species found (Vipera latastei gaditana and Vipera latastei latastei). It can be a either grey or light brown in colour with darker diamond patterns. It is venomous and capable of injecting a human although the venom is not considered dangerous. Rare allergies to the venom can exist.
More information & photos… 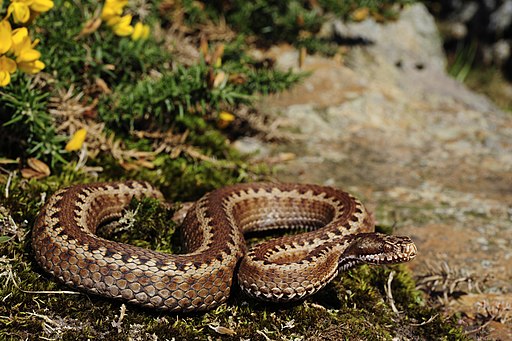 Also known as the Portuguese or Baskian Viper, this viper is only found in the very extreme north of Portugal around the border with Spain. 2 sub-species exist but only one is found in Portugal. It has a very distinctive brown double zigzag pattern along its back with a contrasting lighter beige, yellow or grey colour. It can reach lengths of 75cm but is often much shorter. It is venomous and capable of injecting a human although the venom is not considered dangerous. Rare allergies to the venom can exist.
More information & photos…

Portugal’s largest snake which can grow to 2 meters in length (in some instances it can grow to 2.5m) and can be a hefty 1.5kg. There are 3 sub-species but only one is found in Portugal. The male and female differs slightly. The colouring of the male is deep green and browns with a black area on the front part of the body. Juveniles are more reddish brown with irregular dark spots and white dashes, often females retain this colouring with the pattern turning more consistent and regular. It has large eyes and the impression of eyebrows due to a ridge on its head. This gives it a very stern expression. Often you will notice it raises its head up off the ground. It is venomous, however, not only is the venom very mild in toxicity but the fangs are positioned at the rear of the mouth and are designed to subdue prey rather than be used a method of defence. For a human to be bitten you would have to put a finger down inside its mouth and even then the low toxicity of the venom is not considered dangerous (exception for any rare allergies).
More information & photos… 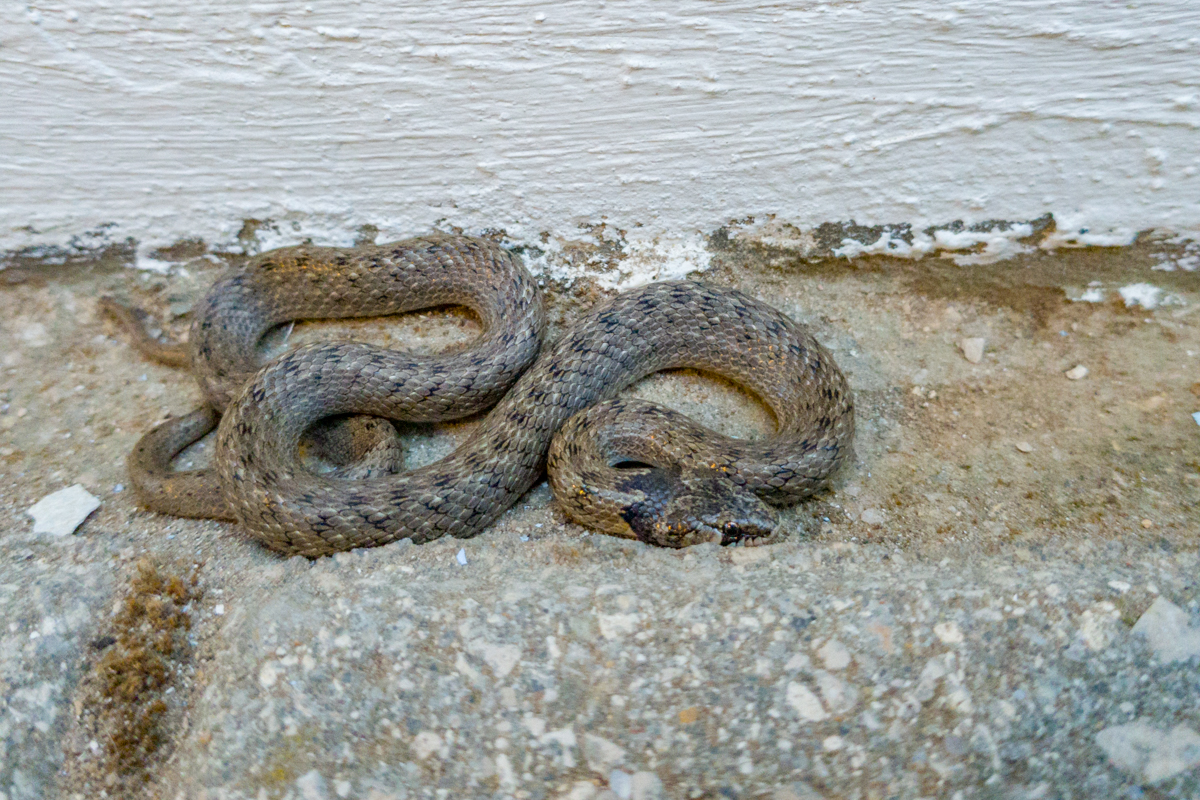 This small snake only grows up to 55cm in length and is often seen at dusk when it hunts lizards and geckos although it has been known to take small birds and rodents. It is very similar in apperance to the Smooth Snake hence its name and as with the Smooth Snake has very smooth dorsal scales. The colouring is a mixture of brown and grey with darker spots and streaks. There is a black collar which can extend on top of the head and a teardrop pattern under the eye. It is venomous, however, its toxicity is very mild and not harmful to a human. Due to its small size and rear position of the fangs, it is not possible to inject a human.
More information & photos…

This snake is very similar to the False Smooth Snake (Macroprotodon cucullatus) shown above. Sometimes the black collar is missing in this sub-species, apart from this I’m unaware of an easy distinction between the 2 species. Please feel free to Contact Me if you can add any further identification tips. As with the False Smooth Snake, the toxicity of its venom is very mild and also due to its size and position of fangs, it is harmless to humans.
More information & photos… 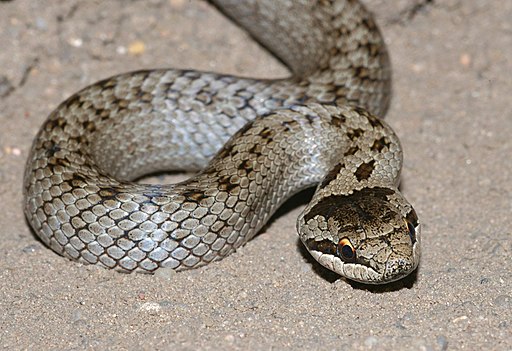 This non-venomous snake grows to 60cm in length and the big giveaway with Smooth Snakes is the patch on top of the head which often looks like a crown, hence the name “Coronella”. The colouring can be brown, grey and even a tinge of red with 2 rows of dark spots running the length of the body. The ventral area (underside) is usually grey or brown with light spots, which is different to the Southern Smooth Snake. This snake is much more common in the north of Portugal.
More information & photos… 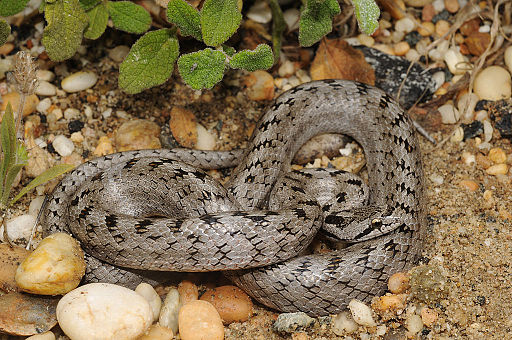 Very similar in size and appearance (including variations of colouring) to the Smooth Snake, but far more common throughout the whole of Portugal. The main difference is the ventral area (underside) which is lightly coloured with dark spots. As with the Smooth Snake, the Southern Smooth Snake is non-venomous.
More information & photos… 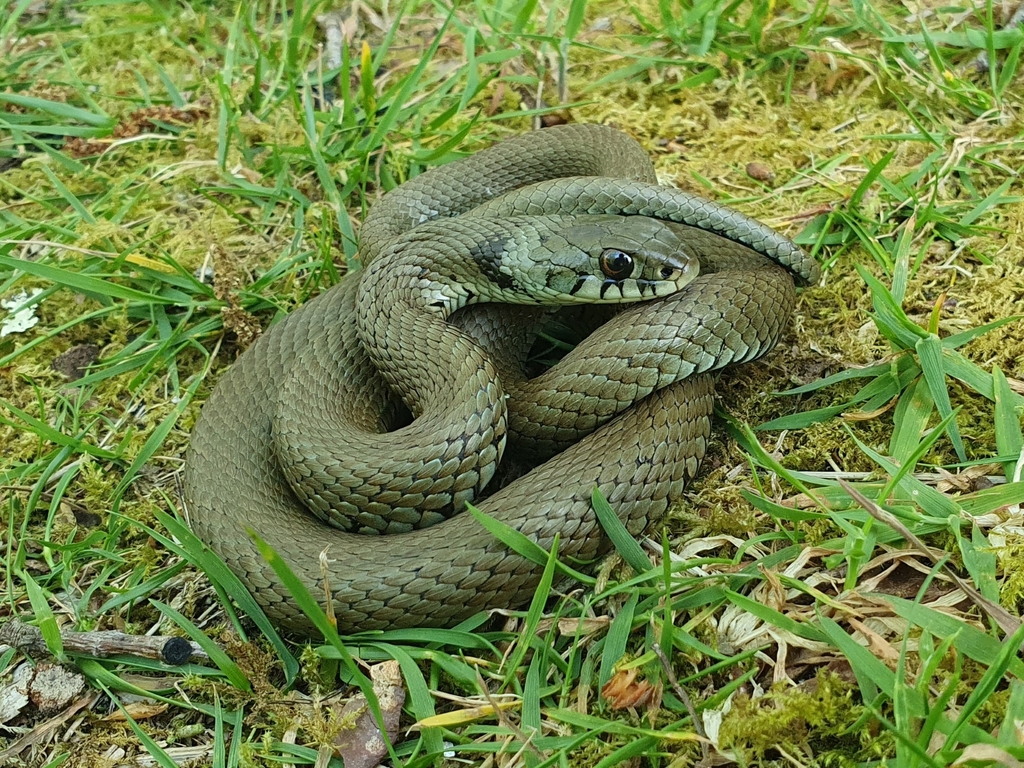 The Iberian region has its own species and as with all Grass Snakes, it is non-venomous and feeds mainly on amphibians which is why they are often seen in and around water. It can grow to a 1.9m in length but is normally around 1.5m. It has large yellow/orange eyes. It usually has greyish green or jade colouring with irregular black spots throughout the body. Young snakes have a ringed collar which usually fades as the adulthood is achieved.
More information & photos… 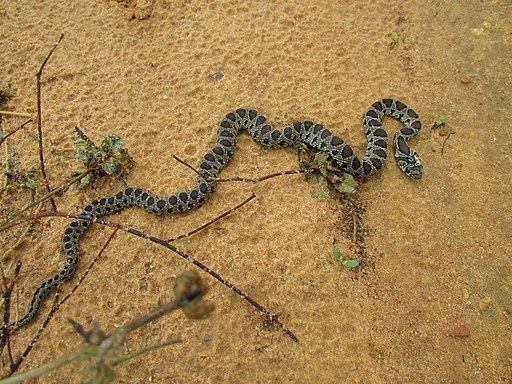 A very common snake in Portugal and one I always like to see due to its amazing pattern. It can grow to 1.5m in length and is easily identified by its large dark spots running the length of its body. The colouring between the spots is much lighter and can be yellow, olive green or a rusty brown. The head is a lot wider than it’s neck and has large eyes. It’s name comes from a light horseshoe shape on the back of the head. It is non-venomous but can strike and bite if threatened.
More information & photos… 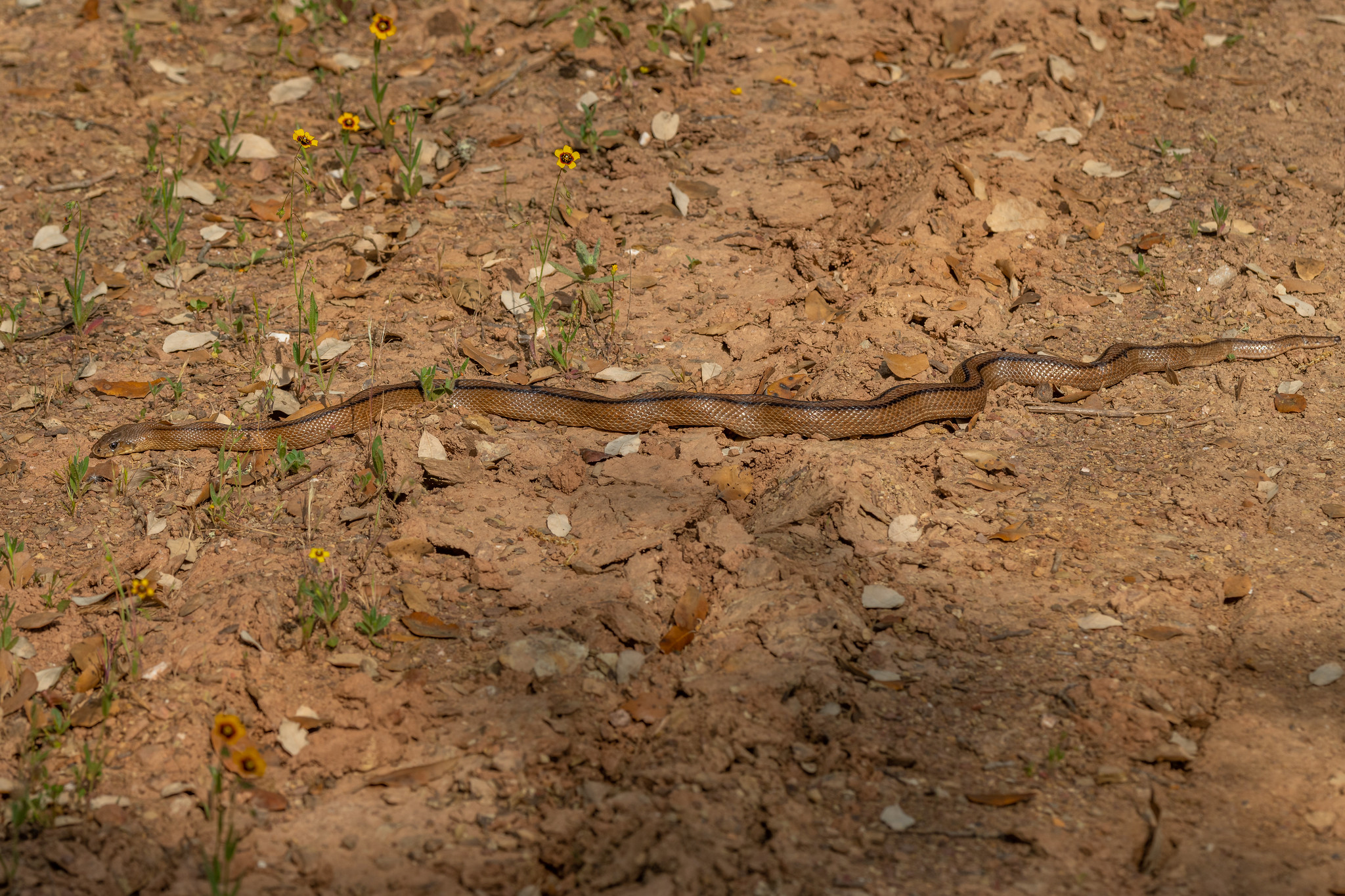 Another very common snake in Portugal and often confusing for people trying to identify. The name comes from the ladder pattern running down the back of the snake, however, as the young grow into adulthood the ladder pattern fades with skin sheds leaving just 2 dark stripes. They grow to 1.6m and are can be a light yellow/brown colour through to a dark brown colour. A small dark strip is usually present from the rear of the eye to the upper and lower jaw joint. This snake is non-venomous but any attempt to pick one up can result in a fierce strike and bite. They are often seen sunbathing on dirt tracks making them a perfect meal for the Short-toed Eagle.
More information & photos… 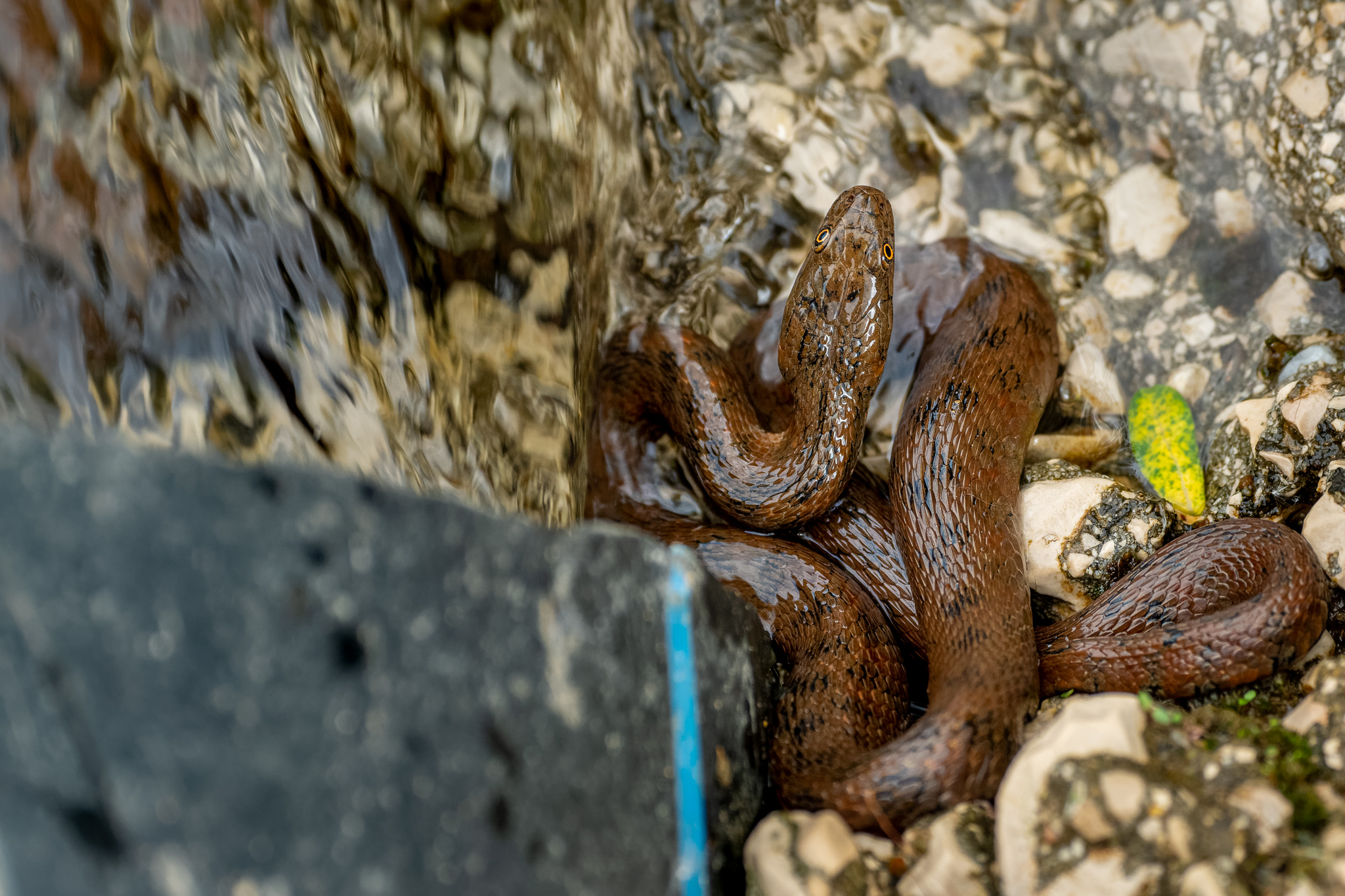 These semi-aquatic snakes spend a lot of time in the water. They can grow to 85cm, but are mostly much shorter in length. Their name comes from their appearance and behaviour of a viper when on land, but in fact are very docile and non-aggressive. It can strike like a viper if provoked, but rarely bites. They are non-venomous. They are grey/brown in colour with a alternating dark spots. Various shades of lightness can be found.
More information & photos…

Attribution of photographs used that are not my own
Thank you to all the photographers that have photographs above shared under Creative Commons Licensing, if you own the copyright to any of the above images and believe that the licensing is incorrect, please Contact Me.

Photography Workshops For All Abilities...!
Are you looking to move away from your camera's Auto setting and be more creative with your photography?
Why not attend one of my Digital Photography Fundamentals Workshop. Two part, 4 Hour sessions for just €55 held at Parchal (near Portimão/Lagoa)!
If you don't currently own a suitable camera and want to learn the fundamentals first? There is a limited availablility of Nikon DSLR Cameras available at no extra cost!
Private sessions including 1-to-1 and 1-to-2 also available! Read more...