I’ve not been monitoring the (Rural) Foxes we have in the garden as much as I did this time last year, however, last night I set the Bushnell Natureview up in the garden.

We occasionally leave out some food scraps (no cooked bones!) and sometimes some treats, but not enough for them to rely on us for food.

Foxes will collect and store food that they don’t eat in food caches but the “Cramming” we are seeing is exactly what happened this time last year. As you can see on the footage, the Fox crams as much food in it’s mouth in one go and carries it off. I think it’s because it’s taking it back to the Den to feed the Vixen who is babysitting her newborn. The food could even be for the young if they are already old enough.

A few weeks after this happened last year, and the Vixen made an appearance in the garden with a single cub.

This repeated behaviour is hopefully a sign that the Vixen has given birth again. 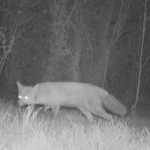 The Foxes are still around! This video from last night shows what I think is the Vixen and “Bottle Brush” the male.

Bottle Brush is so called due to his short bushy tail. Last year, the Vixen was limping and as you can see, she is again. However, this is a different injury as last year it was her left leg.

Very impressed with this new Bushnell, the Infrared LEDs are a lot brighter. I did think I stumbled across a bug as it was only recording 15 second clips instead of the 60 seconds I had configured the camera to do. Turns out, if you use the LEDs in full brightness, the maximum you can get is 15 seconds. Possibly down to the amount of power it uses. I imagine the Medium setting will still be adequate.
END_OF_DOCUMENT_TOKEN_TO_BE_REPLACED

Just in case this happened, I put the flood lights on ready. Plus, I wanted the lights to give her that all important sparkle in her eye even if it was still light.

She turned up around 10:10pm so hardly any usable light left, but you can just about see some blue sky tint in her eyes.

Here is the 2nd photo I managed on Saturday night. I cropped in tight due to the fact that she was slightly too close for me to fit her into the frame.

As I type this she is currently darting around the garden, not quite sure why as she usually just eats the food and runs away. I look forward to getting more photos soon.

After putting the food out last night, I left the garden flood lights on and used my Land Rover as a hide. I wasn’t sure if she’d come with the lights on, but after waiting for about half an hour she showed up.

Even with the lights on, it’s very dark for a camera which meant a very high ISO of 3200. Even so, the shutter speed was only 1/20 second which means she had to be very still at the time of the photograph.

This is the best one I managed to get which I’m pretty happy with. It’s a bit “noisy” due to the high ISO, but still good enough.

I have the option of setting up a remote flash to light the scene, but I’m not a fan of this as I’m sure she won’t appreciate it. It worked for the Mouse shot a few weeks ago but pretty sure it would scare the Fox away and the last thing I want to do is spook her enough that she stops coming.

Captured earlier tonight, here is a quick clip of the Vixen in the garden. This angle shows 100% that she is feeding her cubs. You can clearly make out her lactating nipples. I now wait anxiously for the day that she brings them to the garden to feed, but that will be a few weeks off yet I suspect.

It was one of those days today, a high risk of failure to get the photos I [...]

I posted earlier that I had spotted a Nightingale making a rare appearance [...]

I'm surrounded by Nightingales, all competing to be the loudest, they seem [...]